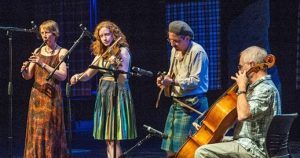 Many thinks to these fine musicians and to Stephen Stiebel for making his house available. We raised over $600 thanks to their generosity and that of all who attended.

Rip the Calico will play a concert from 7 – 8, followed by an hour of waltzing.

Rip the Calico has been playing to high acclaim for contra dances in Chapel Hill, Richmond, VA and Washington, D.C.  In addition, they are featured performers in the Pine Cone’s Music of the Carolina’s series. They specialize in high energy Irish traditional dance music, along with Cape Breton, French Canadian, Galician, Scottish, and original tunes.

More information about the band on Facebook or at the band’s web site.